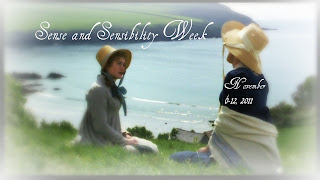 3: If you have watched/heard of more than one adaptation which one was your favorite? I've seen both the 1995 movie and the 2008 miniseries. I've seen a couple of minutes of the 1981 version and we own the DVD for the 70s version, but haven't watched it yet, so I can only comment on the 1995 movie and 2008 miniseries. While the 2008 version is closer to the book plotwise, it didn't capture the tone of the book well; while Sense and Sensibility isn't as bright and happy as Pride and Prejudice or Emma, it's not Wuthering Heights either. It's more of a serious book with some humor in it, but not a dark book. The 1995 movie captured the tone a lot better: it was much better lit than the 2008 version.


4: Which three S&S characters drive you crazy?
Willoughby -- He is probably one of the characters I dislike the most. He doesn't take consequences and pretty much got away with his behavior towards Eliza Williams and Marianne. He was mean to Colonel Brandon behind his back and influenced Marianne to think badly of him:
Elinor then heard Willoughby say, in a low voice to Marianne, "There are some people who cannot bear a party of pleasure. Brandon is one of them. He was afraid of catching cold I dare say, and invented this trick for getting out of it. I would lay fifty guineas the letter was of his own writing."
"I have no doubt of it," replied Marianne. (Chapter 13)

Fanny Dashwood - She shows no sensitivity to the Dashwood women when she takes over Norland. Mrs. Dashwood lost a husband, Elinor, Marianne, and Margaret lost a father, they don't get much of an inheritance and they have to find a different home to live in: yet Fanny shows no compassion. Sure, she allows them to stay at Norland for a while, but she didn't try to ease their pain - she just wants them to get out.

5: Which heroine are you most like: Elinor or Marianne?
I'm probably a mixture of both. I'm not a romantic like Marianne, but I don't keep a stiff upper lip like Elinor all the time. I'm probably have a little more Elinor in me since I tend to use sense rather than sensibility to make decisions.

6: Who would be most enjoyable: (or bearable) Mr. Palmer or Mrs. Palmer?
Maybe Mr. Palmer. You could probably have an intelligent conversation with him. Though if you wanted a laugh, Mrs. Palmer would be okay.