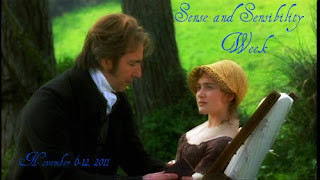 For Sense and Sensibility week, there is a fan-fiction contest that includes poems. I'm usually not one for poetry unless it is humorous and clever, but I gave a try to writing a couple of limericks about Sense and Sensibility. I'm afraid that I'm not very good at poetry (or I just hadn't had enough practice at it), but I'd like to know what you think.


Mrs. Jennings
Mrs Jennings, two daughters married,
Needed something new that varied.
She found two girls named Dashwood
Of which marry they should,
So that from them flowers down the aisle would be carried.

Edward and Elinor
Elinor meet a man named Edward,
which was something his sister abhorred.
Though, Edward was engaged
to a girl that his heart would have plagued,
To Elinor his heart soared.

Willoughby's Departure
Willoughby was a charming fellow
That some would have even called mellow.
From Marianne did he depart,
from which broke her heart,
And caused grief to bellow.

Margaret Dashwood
Margaret Dashwood was a child
That some may have thought to be wild.
She found it to be at adequacy,
That our only option be piracy.
Those around her would have smiled.

Which ones are you favorite?